Since Mothers day has just passed I got to thinking that I never finished my Henry story for the world and so this is as good a time as ever to share it! I had a wonderful Mothers Day with my children. I am so lucky to have such a wonderful family, a fantastic mother of my own, and a great mother-in-law, the mother to an amazing man who I get to share this life with!

Mr. Henry arrived happy and healthy on January 13th 2016 at 1:27 pm weighing 8lbs 3oz what an amazing day it was. Once again things went just as planned and I couldn’t be happier with our experience at the hospital and all the lead up to his arrival!

This was the first time I had left my girls overnight they were only 16 months old after all!

I was scheduled for surgery on the afternoon of the 13th, which gave time in the morning to spend with the girls before we headed in to the hospital. I was concerned that I would be booked in too early to get some time with them the morning we headed in!

We arrived at the hospital and went thru the adm 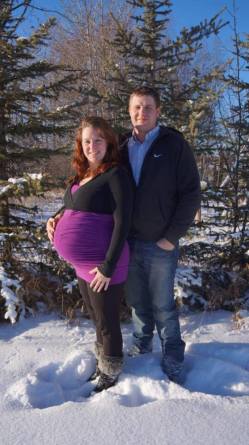 itting process; we got up to our room and settled in. It was a long wait to go to the OR, being later in the day than the girls there were opportunities for emergencies and other reasons for the surgery to be pushed back. After a bit of a wait I was wheeled down to the waiting area of the OR we waited there for the Doctor and the anesthesiologist to come chat with us.

Finally after we had met everyone and they were ready for us the scrub nurse came to take us to the OR. The process of freezing began and once I couldn’t feel the lower part of my body Dr. D began, she used the same location for delivery. Yay only one scar site! This time around I had informed the anesthesiologist of my past experience of mass amount of puking that occurred! She was right on top of the anti nausea medication (which she also ordered as a PRN for after)

Steve was told Henry was coming and he stood in time to see him join the world. The experience after this was a little different than with the girls because the OR was set up with the warmer at the foot of the OR table rather than the head, so Steve was able to tell me it was a boy, but then when he went to him to cut the cord, I couldn’t see or hear anything so it really felt like an eternity before he came back to me holding Henry.

I was feeling good and Henry was doing well so they stayed until my surgery was almost complete, they left to do weights and measurements when I was almost finished. My Friend and nurse was able to be there again for us. (I feel so lucky to have had this experience twice that unfortunately so many don’t get even once.) She brought Henry into me at recovery and helped latch and with the first feed, he ate and then ate some more, I was ready to go back to the room before he was done eating and so Henry came for the ride with me back snuggled in and eating away.

We had so many visitors again, grandparents, aunties, uncles, and Friends stopping in to visit and meet our new little man. Of whom we hadn’t decided on a name for yet! But we were there for a few days so we had some time. We had a whole list of names we liked before we went in, and many were boys’ names, none of them suited him though and we struggled and struggled. Finally Steve was on the phone with a friend explaining we still hadn’t found a name yet, his friend must have asked what his grandfathers name was because he replied Henry. From that moment I looked at the new little man snuggled in my arms and said “Henry Daniel” then a wave of worry came over me. That was his name all right, there was no doubting it; I knew it couldn’t be anything else. The problem was though that not even a month earlier Steve’s brother and I had a conversation about baby names and he and his fiancé had talked about the name Henry being their first-born sons name. When Steve got off the phone I told him our babies name was Henry, it had to be, but he had to call his brother and get his blessing to use it, I would never want to “steal” a name. Steve talked to his brother and of course it all worked out in the end that our boys name became Henry Daniel after his great grandfather and father (Steve’s middle name)

We stayed at the hospital for a couple of days again, because of my surgery we had to hang out there and make sure I was healthy and ready to go home. When we finally left I was so excited to get home, to see my girls, to bring my son home and to start our family life as five.

When we got home the welcome was very emotional, the girls had missed me as much as I them and although Morgan was interested for a couple minutes with this new baby that mom and dad had brought home, she quickly adjusted and continued playing. Jordan on the other hand snuggled in with me and wouldn’t let go, or let Henry in. She had her mom back and that’s all she wanted, it took her a little longer to warm up to her brother.

Of course only five in the house didn’t start until 6 weeks later, I required assistance with everything. The girls still being so young meant that someone had to be with me 24-7 during my recovery time. We were so lucky to have my mom and dad stay with us and help out with the girls. I also was able to have support with cleaning again thru the county’s post partum home care program. Steve was able to go back to work because of the amazing support we received thru this time!

I am so lucky to have had the experiences I have with the births of all my children, the support we have had, and the amazing and beautiful children we have.