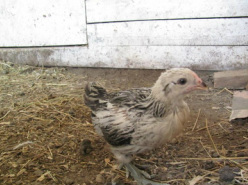 Last spring we ordered 16 Laying hens, and 25 Chicks from a nearby breeder, they arrived and shortly after the hens arrived they started laying eggs for us! The chicks are now very grown up and also laying a variety of colored eggs! I joined a Chicken forum of course because well I knew nothing of chickens or what to do with them and the chicken community out there has been so helpful with the trials and tribulations of raising chickens – my thanks goes out to the Backyard Chickens Community! 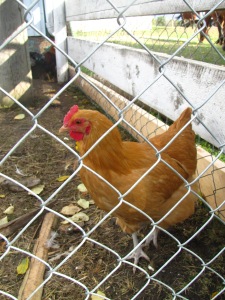 We are lucky enough to have had a barn already on our land when we bought our home. We were able to for very little cost make a room that has acted as the chicken coop. We built a 12×12 room and used leftover scraps of wood we found on our land for the roosts and were given some laying boxes to get started, and last summer using scrap building supplies (fencing and posts) from the re-store and neighbors my husband built a run so the chickens can spend some time outside too!

THE BABIES ARE HERE

Our first go at incubating our own chicken eggs… 9 eggs were started 21 days ago and now here are the little ones in their brooder… chirping and pecking away… happy as can be!!!

The chicks started peeping piping and protruding from their shells. Late Monday the 3rd June 2013 when I arrived home two chicks were out of their shells and many

more were moving around in the incubator. By the next morning five were hopping around chirping away! By the end 8 of the 20 eggs hatched, the babies were out happy and healthy as can be! So we are enjoying having the little ones finally join us! Final egg incubating for the year! That meant an enormous clean of the room that for the past months became the incubator/ brooder/ greenhouse/ bird recovery room. I learned a lot from having the birds in the house such as the awful smell that is hard to keep up with, and the mess they all make! I am looking forward to having my green house

built and running in full swing by next spring! I have now added to my design an area for incubating and brooding; I am hoping this will eliminate the need to ever having poultry hanging out in the house again! Of course Steve who encouraged me along the way said, “ah I knew you would learn from this” a little smug isn’t he! Oh well true I suppose!

The babies have been moved outside now and the big chicks have entered the coop with the existing residents. All the chickens are doing well in the big brooder and coop; they are growing like little weeds. In fact all the animals are thriving on the farm.

One thought on “Chickens”