Last week we took a trip! It was a long trip… it was a busy trip! We took two travel days to get to our destination and three to return home. WOAH!

It was my Grandmothers 80th Surprise Birthday party and we are so lucky to have gone, spent that time with her, and were able to catch up with relatives from all over, some of whom were meeting my children for the first time! My heart was so full while we were there seeing everyone!

We headed out after gymnastics practice, loaded up an aunt and a grandpa and started down the road. I was ready, and I was prepared. My children don’t own technology. They are two and three years old so we have decided that the owning of tablets, I Pads, Phones etc. is perhaps for older kids and teenagers, I wont get into it here… another post, for another day!

I packed snacks, because the key to motherhood and happy children is snacks. I packed games, books, and activities in their own back packs. I made sure the kid’s songs were ready on the stereo. I allowed them their favorite snuggle stuffies and bedtime blankets in the car, which on any regular day would be a big no no and off we went!

They traveled a total of 7 hours the first day with only one short break for lunch and they did amazing! They read books, sang songs, colored pictures, and visited about where we were going. We got a hotel along the way and it had pools, and open areas to run and play, we all got to stretch our legs, swim, burn off some much needed travel energy and get a good night sleep in before continuing down the road again the next day!

And we did get up early, have breakfast and head on down the road again!

After another long day of travel we arrived at Grandmas house. She was surprised to say the least! She had no idea we were coming, and the surprises continued from there. The kids and I were beat, we headed to the hotel and snuggled in for a night of rest, not before seeing and meeting great aunts and uncles who were also all arriving at the hotel, hugs all around and sneaky excited giggles for what was to come once it was party time!! My Aunt and cousin arrived later that night on a flight; all over again she was shocked. Her family was all together for her birthday and she was so happy! 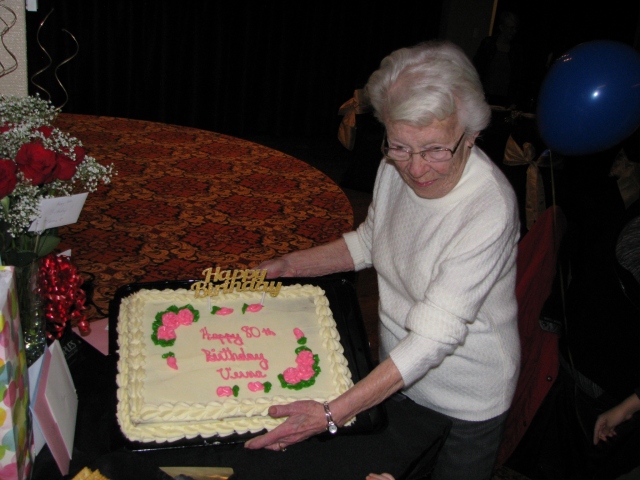 The next night was the big party, everyone was ready, we took her out for dinner then headed back to the hall at the hotel to await her arrival, with a tricky fib she was led into the hall where she was given her final surprise, all but one of her siblings were able to make it to her celebration, some had traveled a great distance to spend this milestone with her. Seeing the laughter and the happy tears made the trip all worth it! The kids all danced and partied until late and loved meeting new cousins and family. 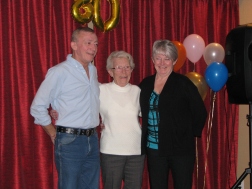 The next day we continued to catch up, visit, and enjoy everyone’s company, we spent the day at grandmas house. Once again it was a late night for the kids but worth all the family time spent together.

After three days of visiting, partying, and catching up it was time to head home. We had breakfast that morning with aunts and uncles who were also leaving that day and said all of our good byes!

We traveled once again to the same amazing hotel to spend some time in the pool again. The next day as we headed out we weren’t sure if we were going to make it… the news alert suggested that the highway we planned to travel was closed. After further investigation we discovered it had in fact just been opened back up, thank goodness. After all this traveling the children were starting to tire of sitting in car seats and traveling down highways so although this portion of the trip only lasted 4 hours it was more than enough for them and we had some major tears the last part of the trip. We stopped at my mom and dads and all three kids baled out of their car seats with enthusiasm! We had dinner that night with family and everyone headed to bed on time.

Now it was time to head home, after dropping Aunty off everyone was excited to get home, get out of car seats and spend the night in our own beds.

The trip was more than fun; it was so exciting to see everyone, I am so grateful to have such an amazing family and support system that made the trip go as smooth as it possibly could.

I have good kids, they are polite, they are well mannered, and they are well behaved. I don’t care who you are or how “good” your kids are if you stick them in a vehicle to travel for 5 days there is bound to be some hiccups!

It was an amazing trip, even with all my hesitations I am so happy we set out on the journey.

Happy trails to you and yours wherever the road may take you!

22 thoughts on “Traveling with Toddlers!”